A year ago, we gave the floor to Emilie Parthuisot, lawyer and forester passionate about environmental protection and founder of Atmosylva, a company whose mission is to act for the protection of forests, biodiversity and climate and where the human being holds a central place. Since October 2020, Quadrapol, a wooden house builder committed to the protection of the environment, has been supporting Atmosylva by funding the planting of trees in afforestation and reforestation projects in France. Zoom in on the reforestation projects underway!

Emilie, can you present the projects currently underway on the territory?

There are several afforestation and reforestation projects currently underway, including the one in the Loiret region where Quadrapol has been working for several months now. This project is composed of two private parcels which are in fact former pastures. Our goal is to plant a variety of species adapted to the current and future local soil and climate. One speaks then about forest station, designating a stretch of homogeneous ground on the aspects of climate, relief, soil and spontaneous vegetation. The analysis of the forestry station guides elaborated by the foresters combined with the field study and the local climate data allow to choose the appropriate species.

For example, in the Loiret project, the climate is temperate and warm with winters that are sometimes cold and wet, and summer droughts are likely to recur in the years to come. On a pedological level, the soil is characterized by sands and clays (Puisaye clay). These potentialities allowed us to select the Sessile Oak, a species that can withstand a certain water deficit, as well as forest fruit trees such as the Cormier, the Wild Pear and the Wild Apple, which are very interesting for biodiversity (melliferous species and producing fruits for animals).

How is the afforestation project in the Loiret financed?

There are different ways to contribute to the projects currently underway. In the Loiret region, there are two types of commitment possible: sponsorship, on an area of 1.08 hectares, and the Low Carbon label (certification issued by the Ministry of Ecological and Solidarity Transition), on an adjoining area of approximately 1.58 hectares.

Sponsorship is a more accessible way for individuals and companies to finance the planting of trees. We propose to plant trees or to offer trees to be planted for 3 euros HT per tree.

The Low Carbon label has the advantage of being recognized and managed by the State and allows companies to officially attest, including internationally, their commitment to the environmental cause through the voluntary carbon contribution. Companies can therefore, after reducing their own carbon emissions, integrate Carbon Emission Reductions generated by the Project as part of their voluntary compensation. The carbon stored in the forest biomass and in the soil is then measured in advance. It is a verified process, it reassures companies and their customers and delivers an internationally recognized certification. The cost is calculated per ton of CO2 avoided or stored. If we were to reduce it to the price of a tree, we would be around 5 to 8 euros per tree depending on the project

What is the current status of the Loiret afforestation project?

The health crisis linked to Covid coupled with a dry period, and sometimes rainfall delaying tillage to avoid settling, delayed planting. It will take place this autonomous on the plot in sponsorship and Low Carbon Label, if all the conditions allowing an effective action and a good development of the ecosystems are met. In this respect, the opinion of the Forest Manager, based on his or her experience, is very important in order to make the right decisions and promote the viability of the plantation.

For the moment, 886 trees remain to be financed on the Loiret plots, out of a total of 1600 trees, which will also be financed by other companies, organizations or individuals. In total, for Quadrapol, 630 trees have been planted since the beginning of its participation, and we thank it very much for our forests!

Is it a challenge to support reforestation and forest protection?

Completely! We work with the living, we must be flexible and adaptable. For example, a planting may be postponed because, due to poor oak tasseling, nurseries will not have been able to grow enough seedlings that year to supply planting projects in subsequent years. Moreover, the spring planting is more and more complicated because of the less well distributed precipitations and the summer droughts which have been following each other for at least 3 years now. It is for all these reasons that a case-by-case analysis of the field and the project is necessary, combined with the experience of the foresters and the operational monitoring that they carry out for the Project.

We plant trees that are generally between 1 and 2 years old with variable heights according to the choice of the forester, often between 40 and 80cm. They are planted when they are small because their root system is not yet developed and will adapt more easily to the soil where they will be installed. This is fascinating because tree roots associate with mycorrhizal fungi in a symbiotic relationship: the hyphae of the fungi explore a larger surface area of soil in search of minerals and water. In exchange, the tree provides them with carbohydrates produced through photosynthesis. A real small collaborative economy! It will of course take a few years before the trees reach a mature size and can form a dense forest. 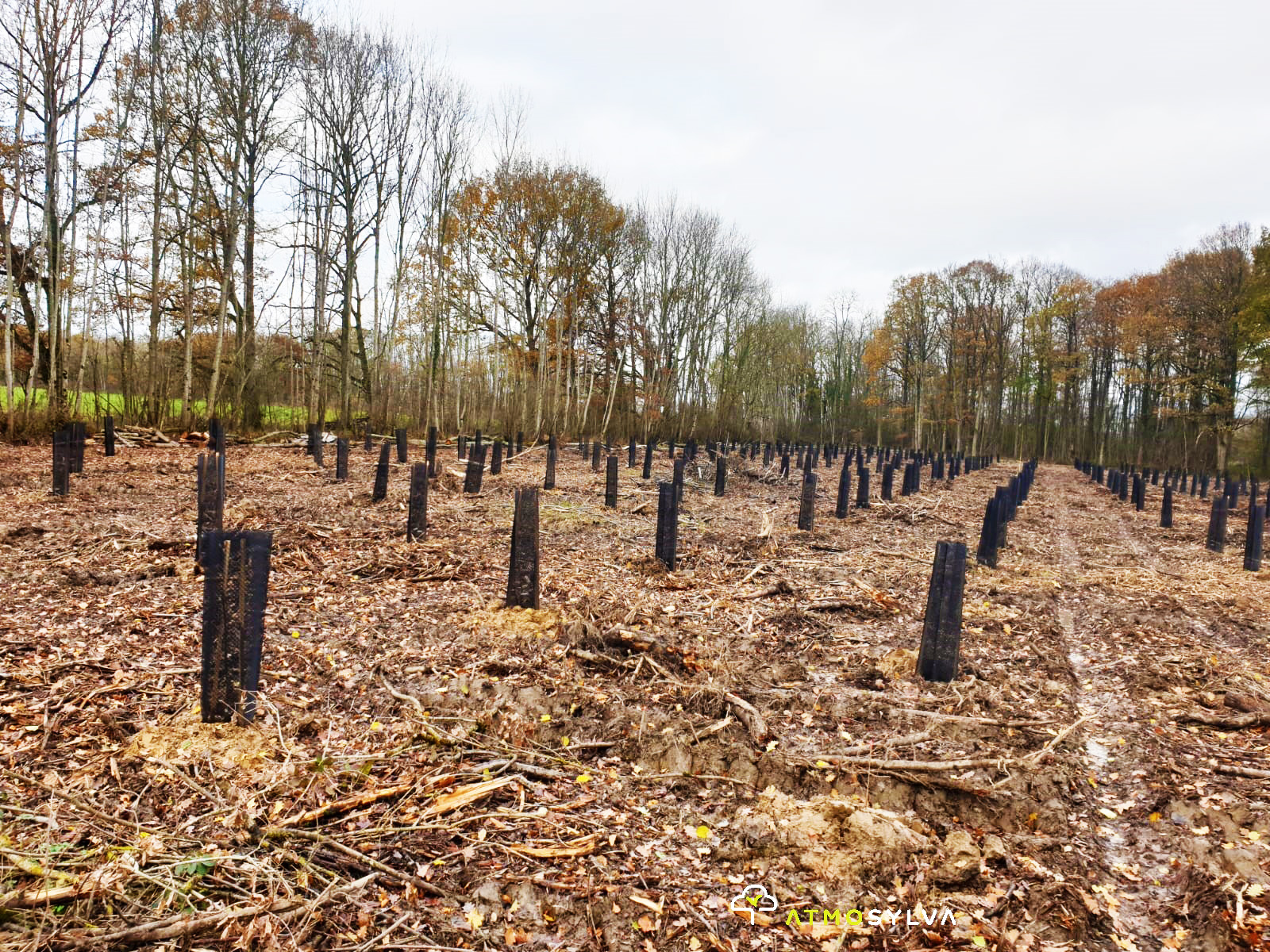 Planting of young trees on a former clay farm

What are the next reforestation projects?

We have several projects in development, under construction or already planted. In Gironde, we have a project to reforest a one-hectare forest burned in 2017. On this project, Maritime Pines and accompanying hardwood species will be planted to diversify the plantation despite the often acidic and filtering soils in this region. The planting should take place next fall and will even be associated with a sporting event!

In Ile de France, we have a project in development with a larger surface. It is a reforestation of a coppice of birch trees very decayed. The trees, being rather native to Northern Europe, did not cope well with the lack of water and the warmer temperatures. In addition, there is not enough natural regeneration on this parcel, which implied to carry out a reforestation on the whole surface of the Project. This is very interesting, but at the same time alarming because it shows once again the impact of climate change on the distribution areas of a number of species. Some trees, such as the Beech, are pushing their distribution area towards the northern part of France and mountainous areas where precipitation remains sufficient for its water needs.

Another project that comes to mind is another reforestation after a fire in Gironde, in the Landes de Gascogne massif. This is unfortunately common in this region, but it is likely to be more frequent in other regions where the forests dry out quickly, notably in the center of France which, however, was less sensitive to fires until now. These fires are very often caused by humans: barbecue, motorized vehicle, cigarette butt… It is therefore very important to raise awareness among the population and tourists about the protection of the forests: spending vacations in nature also means knowing the right gestures to adopt to preserve it.

Speaking of awareness, can we see the forests that have benefited from reforestation?

Most of these forests are privately owned, but we can organize guided tours with a forester, upon request of the contributing companies or associations. During the visit, the whole project is presented by Atmosylva and the forestry expert in order to explain the stakes of the project and the silvicultural choices which were made.

Other activities can be organized, such as participation in plantations, concerts, orienteering or treasure hunts on themes related to the forest for a total immersion in history and nature. For these treasure hunts, we work with groups of 30 to 40 participants divided into teams of about 5 investigators. This activity can be organized as part of a team building event, but is also open to the general public during events such as Forest Night.

To experience these educational and fun visits in the forest, we invite you to participate in the event
Forest Nights
which will be held from July 2 to 4, 2021 throughout France. Atmosylva is a partner of the event and organizes two treasure hunts on the theme of forests in the Middle Ages, in the forest of Sénart at La Faisanderie (91), associated with a concert, outdoors of course! Other events will also be organized everywhere, in the French forests! A great opportunity to change air and enjoy nature after a year of confinement and curfew!

A big thank you to Emilie for sharing her time and expertise with us!

Quadrapol is a builder of wooden chalets, habitable garden studios, lodge or even small wooden houses on wheels, commonly called Tiny Houses, whose objective is to offer affordable, cost effective, sustainable and environmentally friendly housing. The building sector is the second most polluting after transportation. It is important to react and use common sense. By turning to lightweight housing, liveable wood buildings and small wooden houses, you significantly reduce your impact on the environment. Indeed, a small wooden house stores CO2 instead of releasing it, but is also easier to heat thanks to the optimal insulation that wood offers.

For its realizations, Quadrapol, builder of wooden chalet, uses wood from sustainably managed forests. Thus, no clear-cutting, the fauna and flora are preserved. By combining the use of FSC and PEFC certified wood with reforestation actions for each garden studio, tiny house or wooden house built, Quadrapol contributes to the preservation of our forests.